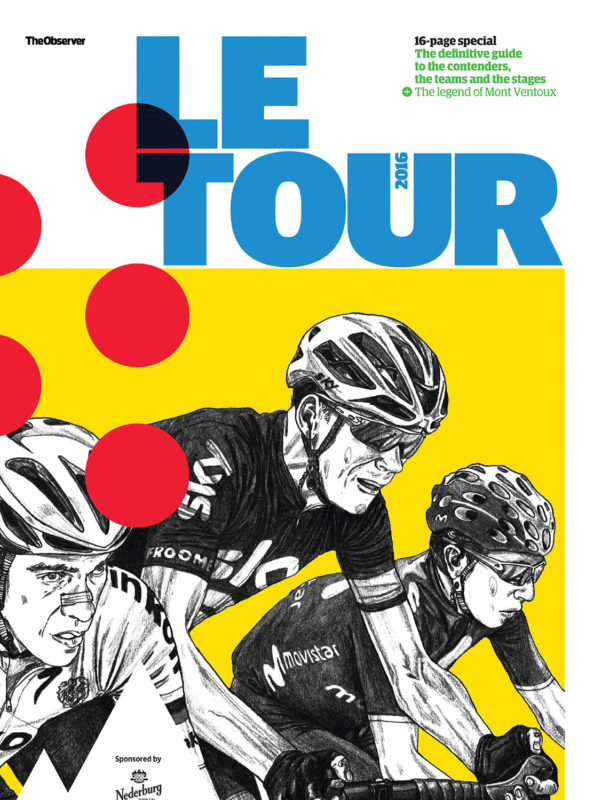 Nothing marks the peak of summer like the annual uncompromising, backbreaking cycling race, the Tour de France. One of our illustrators David Sparshott is big into his cycling, and so was very excited to be commissioned by The Guardian to illustrate the cover of their Tour De France supplement. His work often comes back to his passion for cycling, which is exactly why Andrew Stocks at The Guardian knew he was the right man for the job. David approached the brief with his signature pencil style, and effortlessly managed to convey the blood, sweat and tears the race entails. He created a few pencil roughs attempting different compositions and poses, before landing on the chosen arrangement consisting of portraits of Froome, Quintana and Contador which you see here. Excellent work.

We were delighted to once again be asked to contribute to Shelter's newspaper 'here' this month, with Tom Haugomat supplying the front cover art.

Tom's cover cleverly depicts the different fictional spaces in which we live and exist set through the day and into the evening. The artwork is a reflection of a feature from the magazine where readers were invited to submit a photo of the view from their window, Tom was tasked with reversing and illustrating these views to capture a still image of the different lives people lead.

If that wasn't enough David Sparshott was also able to provide some of his hand drawn magic for another feature about soaring prices in investing and buying homes in New Zealand, Germany and Hong Kong which we think turned out rather nice.

Next
Previous
Late last year David Sparshott was approached by Brookyln's finest Doubleday & Cartwright and asked to work on a huge project for US corporate giants General Electric (GE).The agency were striving to build a sports-relevant campaign to articulate GE’s Internet of Things innovations. As athletes know, incremental improvements — in training, nutrition, or strategy — can lead to major gains. Using this analogy the agency build a campaign to show the same rules apply to  industry in the information age. A content-driven campaign known as “Game of Inches” was build around this premise.To bring this all to life they turned to David, seeing his illustration as having the tactile quality required to communicate the human story behind the technology. As well as still illustrations, his work was also animated into a series of short spots. You can watch the full set here.The campaign rolled out across Instagram, Pinterest, Twitter, Tumblr and a YouTube campaign promoting the “Game of Inches' during the Super Bowl XLIX.

Next
Previous
The great thing about working with SHOP magazine is that they get our illustrators to put their lovely artwork on a range of their covers, it's a pretty good deal.Here we have the first instalment from David Sparshott and Matt Murphy, David created this elegant fashion-led hand drawn piece for the Italy edition showing how to dress like a classic Italian woman where as Matt produced a beautifully coloured surreal piece that depicts a creative thought from a fashion designer for their Belgium edition.Expect more lovely SHOP covers from our talented bunch soon.

Next
Previous
After David’s work on a previous issue of Here we were approached again by the housing and homeless charity Shelter for more wonderful hand drawn illustrations from the man himself.The paper itself is designed by the agency Smoke who were happy to see David work on the ‘Nuggets’ section in this issue. The idea was to create the main illustration from a combination of spot illustrations that visually summarise each article in this section of the publication.